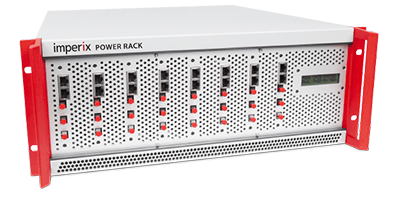 Power electronic converters generate non-ideal current and voltage waveforms, which unavoidably include a broad spectrum of undesirable switching harmonics. In most applications, these harmonics must be mitigated, e.g. with passive or active damping, requiring the use of various types of filters. Among them, LCL-type filters are popular, thanks to their good trade-off between complexity, performance, size, and cost.

However, LCL filters have an inherent resonant frequency, which may cause instability, and therefore requires some sort of damping. Different damping approaches are available (passive [1], active [2], inherent [3], hybrid damping).

All damping techniques are based on the modification of the global impedance, shifting or reducing the admittance peak at the resonant frequency. Passive damping consists in modifying the LCL filter structure (mainly with resistors) in order to stabilize the current. Reciprocally, active damping makes use of the system-level control inputs in order to virtually alter the global impedance.

This technical note is focused on a possible method of active damping for LCL filter. It is mostly inspired by the work reported in [4].

The following configuration is considered. The DC bus voltage is assumed to be constant and the control objective is to control the grid current Ig (energy transfer from DC bus to grid) while damping the filter.

Since the grid is assumed to be an ideal voltage source, the transfer function of the LCL filter is

In this example (L1=L2=2.5 mH, Cf=3µF), the cutoff frequency is 2.6kHz. It reflects a natural resonance, which means that, at this frequency, the impedance is zero and the current tends to be infinite. In practice, as the grid voltage source isn’t ideal and the cables and inductors have parasitic resistances, the current can’t become infinite, but may be high enough to damage the system. Consequently, the system must be damped in order to avoid the impedance from being zero at this frequency.

Active damping of a LCL filter

The damping of the LCL filter can be achieved with several approaches (passive, active, hybrid)[1-3]. Active damping consists in modifying the closed-loop transfer function to remove the resonance phenomenon.

Feedback control techniques are generally used for this alteration of the transfer function, relying on either the inverter current, the capacitor voltage, or the grid current. Notably, the feedback of the grid current is interesting as it can modify the closed-loop transfer function to be equivalent to that of an LCL filter with a resistor on the grid side. This equivalence authorizes a simple understanding of the damping dynamics.

Following this approach, the control of the LCL filter can be subdivided into two parts:

First, a proportional and resonant controller is developed for the grid current fed by the inverter. This topic is further detailed in TN110. The base circuit equations yield:

Second, the damping is achieved using a feedback loop on the grid current, as proposed in [4].

A feedback with the transfer function s2 allows inserting a virtual resistor in parallel with the inductor L2. However, the implementation of a double derivative is uneasy. Alternatively, the following transfer function can be used, which replaces the virtual resistor with a virtual inductor, itself being in parallel with an inductor and a resistor.

The following illustration shows the possible circuits to be added in parallel to L2.

The system and the control presented in this note were simulated using Matlab Simulink and PLECS. The system parameters are summarized in the next table. They correspond to the inductors and capacitors of the passives rack. The latter indeed contains inductors and a three-phase LC filter, which can be easily connected together to form a full LCL filter.

The existing LC filter is preconfigured with 1Ω damping resistors, but these are generally insufficient to provide satisfying damping in a broad range of conditions.

The following figures show the result of the deactivation of the active damping at 0.2s. As it can be seen, the system becomes rapidly unstable. In practice, if such a phenomenon would occur, the over-current protection thresholds on the controller (e.g. BBox RCP) would block the generation of inverter PWM signals, hence almost instantly blocking the grid currents and damaging consequences.

The following figures show the system response to a step of reference current, with the active damping properly configured. During the transition, an oscillation of 0.2A peak-peak appears which is damped in 2ms with a damping frequency at 2.5kHz (8 times lower than the switching frequency).

Experimental results related to this active damping method are available in the application note AN005.

Ludovic was a R&D engineer at imperix. He authored several notes on the control of grid-connected converters.