A well-known countermeasure to this shortcoming is the implementation of the control within a synchronous reference frame. This means that PI controller(s) are implemented inside a rotating reference frame (dq), which is synchronized with the AC frequency (e.g. of the grid or the electric motor). This allows re-locating the (almost) infinite DC gain at the desired frequency, namely 50/60Hz (or the motor rotating speed). More information is given in:

Alternatively, proportional resonant controllers (PR) have attracted significant interest for AC current/voltage control applications due to the simplicity of their implementation. In practice, they offer a finite but very high gain at the targeted AC frequency, while being easy to implement, especially for single-phase systems.

In essence, proportional resonant (PR) controllers are usually designed such that the controller transfer function is similar to:

Practically, this expression may be difficult to implement into a digital controller, which is why a more practical alternative is to introduce some damping around the resonant frequency, resulting in:

were \(\omega_c\) designates the resonant cut-off frequency (i.e. width of the resonant filter). In this second expression, the gain at \(\omega_0\) is now finite, but still high enough for enforcing a sufficiently small steady-state error. Interestingly, the widening of the bandwidth around \(\omega_0\) also offer increased tolerance towards slight frequency deviations, such as in most practical grid-tied applications.

A practical implementation can be easily derived using the bilinear (Tustin) transform. The resulting discrete transfer function for the resonant term, discretized with a period \(T_s\), yields:

Once transformed into a difference equation, the resonant part yields:

This difference equation can be easily used for generating run-time code. Notably, a possible implementation on Simulink is given below. A similar implementation is given in [1].

Proportional resonant controllers can be relatively easily tuned using the controller gains as well as the width of the resonant filter \(\omega_c\). The side figure illustrates the tuning of the proposed PR controller with various values of the resonant gain, with \(K_p=15\). Further details regarding the tuning can notably be found in [2].

The imperix IDE provides numerous pre-written and pre-optimized functions. Controllers such as P, PI, PID and PR are already available and can be found in the controllers.h/.cpp files.

The necessary parameters are documented within the controller.h header file. They are namely:

The included file provides a Simulink block that uses the above-presented implementation. This block can then easily be integrated with run-time configurable parameters:

The first graphs show the grid voltage and the stabilized value of the grid pulsation:

The small remaining oscillations on the grid pulsation (<0.4% of the nominal value) are an expected consequence of the finite loop gain of the SOGI block at the fundamental frequency.

The measured grid current matches perfectly the given reference:

A jump of current reference has been performed in both simulation and experimental modes. The following graphs show a comparison between both results:

In simulation, a small overshoot can be observed on the current. This can be explained by the fact that the isolation transformer is not taken into account (modeled) in simulation. Indeed, the transformer increases the total inductance between the converter and the grid, which in turn increases the inertia of the system. 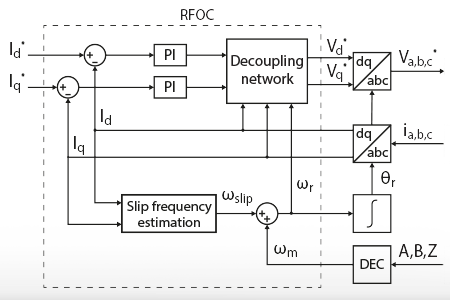 This note covers the rotor field-oriented control of an induction machine and its implementation on a user-configurable voltage-source inverter. 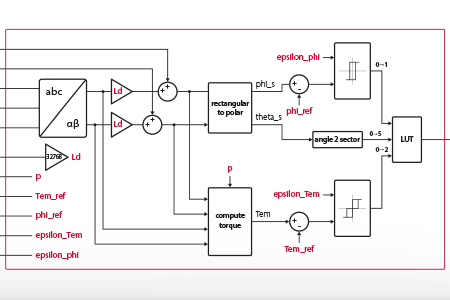 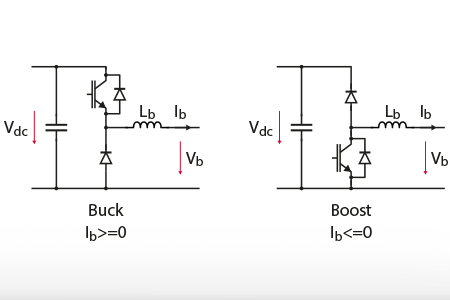