This page explains how to edit the FPGA firmware of the B-Board PRO (equivalently to the B-Box RCP). Imperix offers the possibility to customize that FPGA firmware by instantiating the imperix firmware IP in Xilinx Vivado and editing programmable logic around it. To that end, the provided template provides access to a pre-written framework, designated as the sandbox.

The sandbox enable the user to:

C++ drivers and graphical interface blocks (Simulink and PLECS blocksets) are provided in order to exchange data with the FPGA and configure the PWM outputs.

Information on how to set up the toolchain for the FPGA programming is available in PN120.

The B-Board is based on a Xilinx Zynq XC7Z030 System-on-Chip which consists of a Processing System area (PS) with two CPU cores and a Programmable Logic (PL) area.

The fixed part of the FPGA firmware containing the pre-implemented peripherals is packaged in the imperix firmware IP.

The step-by-step guidance to instantiate this IP in a Vivado project, generate and load the bitstream into the B-Board is available in PN120.

The imperix firmware IP is designed such that it provides interfaces for implementing special user HDL logic in the so-called sandbox. All interfaces of the firmware IP are accessible and may read or substituted with respect to physical (chip) I/Os

The content of the imperix firmware IP is obfuscated and cannot be either read or edited.

This section describes the ports of the imperix firmware IP.

These ports are necessary to communicate with the various components on the B-Board. Modifying these connections could alter the proper behavior of the device.

The user interfaces include data ports and timing signals to exchange data with the CPU, drive PWM outputs, and access ADC value.

Understanding the real-time behavior of the firmware

To correctly develop and integrate custom logic in the B-Board FPGA, a proper understanding of the system behavior during real-time execution is necessary.

The four phases of a control cycle

The next figure is a simplified representation of the elements involved in the real-time execution of the control code and shows the four phases constituting a cycle, which are:

During the READ and WRITE phases, data transfer is handled by the RealSync DMA engines and is independent from the CPU execution.

Four ports of the imperix firmware IP provide timing information, as shown in the next figure.

The ACQ phase starts with the assertion of sampling_pulse and ends with the assertion of adc_done_pulse, indicating that new ADC values are available in the ADC registers. A pulse on read_pulse signals the start of the READ phase when SBI registers flagged as real-time are sent toward the CPU. At the end of the WRITE phase data_valid_pulse is asserted notifying that new data is available in the real-time SBO registers.

The sampling and interrupt frequency are configured using the following C++ functions. In Simulink, the same parameters can be entered in the Configuration block.

Exchanging data between the CPU and the FPGA

The Output towards the SandBox (SBI) and Input from the SandBox (SBO) registers allow data exchange between the user control code in the CPU and the user logic in the FPGA. The C++ the drivers are available in includes/sbi.h and includes/sbo.h.

Their Simulink counterparts are named SBI and SBO.

The configuration phase occurs only once at the system startup and aims to initiate FPGA-based peripherals and configure the real-time data traffic, possibly across the control network. During this phase, interrupts and PWM operation are not yet active.

As their names indicate, these functions infer immediate data transfers, which are performance-wise rather time-consuming and therefore cannot be used during real-time execution.

In Simulink, real-time registers are clearly distinguished from configuration registers. They take their run-time values from the block inputs.

Before entering the control interrupt, the data that have previously been configured as real-time are retrieved from the FPGA peripherals and placed into the CPU read buffer (READ phase). As such, they can readily be used from inside the control interrupt using Sbi_Read.

Reciprocally, using the Sbo_Write function inside the control interrupt stores data into the write buffer, waiting to be sent back to the FPGA once the interrupt is completed (WRITE phase).

On the firmware IP, the sb_pwm[31:0] port provides access to the same PWM output chain as that used by other modulators (CB-PWM, PP-PWM, DO-PWM and SS-PWM). This allows the user to generate complementary signals with dead-time, use the standard activate and deactivate functions and rely on the protection mechanism that blocks PWM outputs when a fault is detected.

The PWM chain can be configured using the C++ function from includes/pwmSandbox.h.

In a channel configuration (pseudo-complimentary signals with dead time), the user only needs to generate the HIGH signal, which must be connected to the appropriate sb_pwm input (sb_pwm[0], sb_pwm[2], sb_pwm[4], etc.). An example of such a configuration is available in TN120.
Imperix strongly discourages the user to directly drive the top-level pwm port as this would bypass the enable/disable mechanism! Instead, the SB-PWM port is meant to provide proper access to PWM outputs, which should be used in all cases.
On B-Box RCP, this is only relatively sensitive as hardware protections exist. However, on B-Board PRO, this is critical since this mechanism also handles the fault management ! 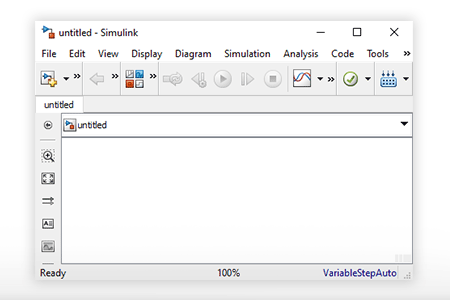 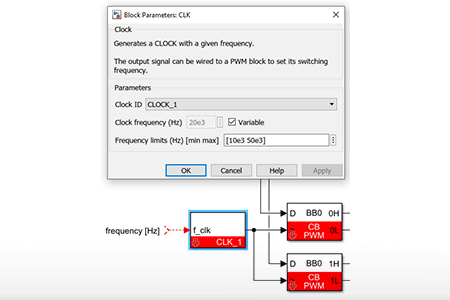 This document provides instructions on how to implement Multi-rate control on PLECS with ACG SDK. It allows running part of the control at a slower… 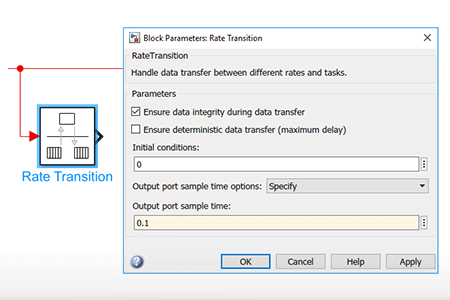 This document provides instructions on how to implement Multi-rate control on Simulink with ACG SDK. It allows running part of the control at a slower… 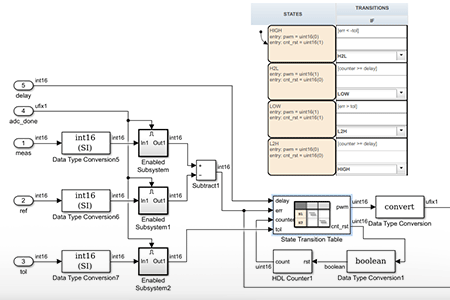