This note provides in-depth content for an accurate and efficient offline simulation of an imperix controller and the corresponding plant model using ACG SDK on PLECS.

The offline simulation is meant to reproduce as faithfully as possible the behavior of the overall system (controller and plant). To that end, the PLECS blockset (part of the ACG SDK) was designed with the following guidelines in mind:

With all the phases and delays modeled accurately, the simulated controller has the same dynamics as the real controller, which allows tuning the control parameters during the offline simulation.

The imperix blockset is already implemented in a way that automatically follows these guidelines.
As such, no particular action is required from the user.

Working principle of the main blocks

The four fundamental blocks are the 1) Config, 2) Control Task Trigger, 3) ADC, and 4) PWM blocks. Most applications can work with those four blocks only, as in the standard configuration shown below.

The CONFIG block configures CLOCK_0 frequency and oversees the configuration of the main interrupt frequency. CLOCK_0 serves as a time reference for different peripherals such as ADC or PWM.

Four parameters are available to configure CLOCK_0 and the execution of the main interrupt:

The total cycle delay is a parameter used in simulation only. It is introduced to simulate the delay from the moment the ADCs are sampled to the moment the calculated duty-cycle is propagated to the FPGA PWM management. It takes into account the ADC sampling time (2 µs on a B-Box RCP), the control algorithm execution time, and the FPGA read and write transfer time.

The total cycle delay is displayed in the “Target info” pane of Cockpit (formerly Timing Info tab in BB Control) when a code is running (requires software above ACG SDK v3.6). In previous versions, an estimation of the total cycle delay can be derived from the CPU load displayed by BB Control, by multiplying it by the interrupt period.

The PN142 provides more details on the various delays and their effect on the control dynamics.

The Control task trigger block is used to model the execution of the control algorithm within an interrupt routine. Therefore, the discretization of this subsystem and all block contained within are forced at the main interrupt frequency. The Forward Euler method is used to discretize continuous states within the subsystem (it forces the subsystem to be “atomic”).

As an example, the following two systems have strictly identical behaviors when the sample time of the discrete integrator and the Control Task trigger are set to 1/f_clk0:

The ADC block enables us to retrieve the sampled value of a given ADC channel and to convert it to its value in physical unit. The input signal is typically a continuous signal coming from the plant model and representing a measurement value.

The simulation model of the ADC block simply sample-and-holds the input signal on the rising edges of the ADC trigger input. The sampled signal is then scaled according to the sensor sensitivity parameter to be converted to its value in physical unit.

Various types of pulse-width modulators exist within the imperix control library. Among them, the carrier-based PWM modulator (CB PWM block) is certainly the most commonly used.

The CB-PWM block configures the corresponding FPGA peripheral and generates the PWM signals according to the duty-cycle and carrier phase parameters.

In the simulation model, the clock signal (1) connected to the clock input is used as a time reference to generate the carrier signal (2). In parallel, the duty-cycle value (3) is sampled once or twice per switching period (depending on the update-rate parameter) and compared with the carrier to produce the output PWM signal. A dead-time is then applied to the complementary PWM signals (5). (A more complex model is used to generate a carrier with a variable phase, which is beyond the scope of this document.)

Stéphane is a software development engineer at imperix. He authored and co-authored numerous software reference articles. 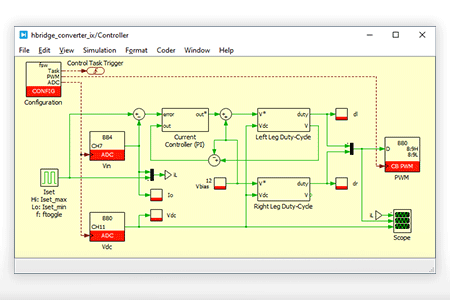