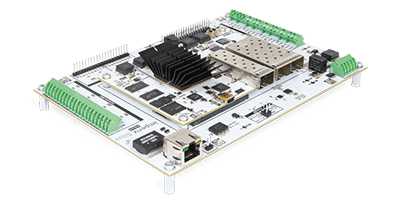 Model Composer is a Simulink add-on software developed by Xilinx. It is a high-level synthesis (HLS) tool that allows the user to program an FPGA-based algorithm without the need to write code. Thanks to this approach, behavioral simulations can be run prior to code generation, enabling engineers to validate the correctness of their FPGA design very early in the design process.

Since it is directly integrated within the Matlab Simulink environment, Model Composer is fairly easy to use for regular Simulink users. The provided blockset offers numerous elementary blocks and functions that strongly resemble existing Simulink blocks. Therefore, if users already have a CPU-based model available in Simulink, they can easily build an FPGA model by replacing the Simulink blocks with corresponding Model Composer blocks.

An alternative to Model Composer is Xilinx Vitis HLS, a tool that provides the same features but for C++ developers and that is free of charge. As a matter of fact, Model Composer uses Vitis HLS under the hood. Indeed, it first generates C++ code as an intermediary step and then uses Vitis HLS to generate the Vivado IP. Despite this process, the user does not need to be familiar with C++ since everything is handled automatically by Model Composer.

To find all FPGA-related notes, you can visit FPGA development homepage.

What is the difference between Model Composer and System Generator?

Model Composer, however, is an HLS tool. It is therefore tailored for higher-level designs such as control algorithms. It supports AXI4-Stream interfaces (which allow to easily interconnect multiple IP blocks), complex data types, and math functions. The behavior of HLS tools is basically the following: 1) receive input data, 2) execute the algorithm, and 3) outputs results. It means that, unlike System Generator, it is not well suited to fine signal manipulation (such as peripheral signals).

Model Composer, along with System Generator, is part of the Xilinx Add-on for MATLAB & Simulink, which can be bought as an add-on license to Vivado or Vitis. At the time of writing this page, the price is set at $500 for a node-locked license and $700 for a floating license (a free 90 days license is available).

To install the Xilinx Add-on for MATLAB & Simulink, an option must be selected during the installation of Xilinx Vivado System Edition. If Vivado is already installed, the Vivado Add Design Tools program should be used to install the add-on.

This section broadly outlines the main steps required to generate a Vivado IP using Model Composer. It is not its purpose to be exhaustive but rather serves as a guideline. It also provides tips for designs targetting imperix controllers. For more detailed information, the user should refer to the official Model Composer User Guide.

How to launch Model Composer?

If Xilinx Add-on for MATLAB & Simulink has been successfully installed, a “Model Composer and System Generator” shortcut should have been created on the desktop. This program will open a new MATLAB session and load the Model Composer blockset library for Simulink.

The sources of the Model Composer example used in this tutorial can be downloaded below. It is a PI-based current controller for a buck converter, based on the algorithm presented on the PI controller implementation for current control technical note. This example will be used as support to illustrate the key points of the Model Composer workflow.

It is highly recommended to read through the high-level synthesis for FPGA developements page first to see how this IP integrates into a complete design. It will help understand some of the choices made, notably regarding the input and output ports.

The first step of any Model Composer design is to add a Model Composer Hub which serves to configure the compilation of the design and the IP core generation. From this block, the following should be configured:

The user can then create a subsystem. In this example, the subsystem is called XMC_PI_floating (for Xilinx Model Composer PI using floating-point arithmetic). We’ll begin by specifying all the input and outputs of the IP. As shown in the screenshot below, the port data types are specified directly in the signal attributes of the Inports and Outports. We’ll use the following:

We then add an Interface Spec block that specifies the IP core interface protocols. We use the following configuration:

Model Composer only supports up to 8 inputs and 8 outputs per IP.

Below is shown the XMC_PI_floating subsystem. It shows that a Model Composer design is very similar to a standard Simulink design.

Here are some comments regarding this design:

Verifying the design in simulation

The screenshot below shows the buck converter model used to validate the current control algorithm. It also simulates the PWM generation. The outputs of this model are continuous values in volts or amperes. The ADC sample subsystem models the ADC chips behavior by transforming the continuous physical values into sampled int16 values.

The Simulink-based current control algorithm that serves as the reference implementation is shown below.

The reference current input is stepped from 3 A to 5 A. It can be observed that both implementations are behaving very similarly.

As mentioned earlier, Model Composer is an automated generation code tool based on Vivado HLS C++. Unfortunately, Model Composer uses the #pragma HLS PIPELINE directive by default which causes issues in our use case.

Why is the HLS PIPELINE pragma an issue?

The PIPELINE primitive reduces the initiation interval (II). In other words, it increases the maximal throughput of the IP by reducing the number of clock cycles between each input. The side effect is that the data is “stuck” in the IP until new data is fed to the input. For instance, if the IP latency is 10, then the result for the 1st data will be available only after the 10th data has been loaded into the IP. This is suitable for applications such as video processing where the data stream is constant and throughput optimization is most important. However, in a closed-loop control system such as ours, this behavior is not adequate, so we need to remove the HLS PIPELINE directive.

For more information on the PIPELINE directive, please refer to the Xilinx HLS pragmas documentation.

The FPGA of imperix controllers (part: xc7z030fbg676-3) possesses 78600 LUT, 157200 FF and 400 DSP, from which around ~30% is used by the imperix firmware IP.  By clicking on Solution -> Open Report -> Synthesis, the user has access to the synthesis summary report which estimates the IP latency and resource usage. Make sure that the Pipelined option is set to no.

The tool generates a warning if it thinks a timing violation may occur. However, this is only an estimation. We observe that Vitis HLS always generates a timing violation warning when using an integer to floating-point conversion (uitofp operation) and a target period of 4 ns. However, when implementing the full FPGA design, Vivado still reaches successful timing closure.

Adding the IP core to a Vivado project

To interconnect the generated IP with other IPs, it needs to be added to a Vivado project. To do, in Vivado:

Back to FPGA development homepage

Benoit is the head of software development. On the knowledge base, he is the author of numerous software reference documents.