This note deals with the implementation and control of a Dual Active Bridge converter. First, the topology and the theoretical aspects of the DAB inverters are presented, including a short overview of the main modulation techniques. Then, a possible control implementation on the B-Box RCP or B-Board PRO is introduced using ACG SDK on Simulink, and simulation results are shown.

The topology of the DAB converter is shown in the following figure. This system can be easily implemented using four PEB modules, or two PEH modules.

The simplified loss-less scheme of the DAB converter is shown below. It assumes that the magnetizing inductance is infinite, the switches and the voltage sources are ideal, and neglects the winding resistance and capacitance.

Although all 3 degrees of freedom can be combined and exploited in an optimization process, the most used method is to fix some of the parameters to reduce the problem complexity. This leads to 3 typical modulation techniques of different complexity, achieving different levels of performance.

Modulation techniques for the control of DAB converters

The principal modulation techniques traditionally used are the 1) phase-shift, 2) triangular and 3) trapezoidal modulations. These techniques may also be 4) combined.

Phase-shift modulation is probably the simplest modulation technique for DAB converters. It usesD1=D2=0.5 (i.e. 2-level switched voltages), reducing the degrees of freedom to ϕ only.

The switched voltage and inductor current waveforms are depicted below:

With this method, the power transfer between the primary and secondary has the following simple expression and has a maximum for ϕ=0.25.

More generally, it can be shown that for V1 > nV2 , the power transfer is limited to

The limited maximum power transfer of triangular modulation can be increased by using trapezoidal modulation. With this technique, ZCS is achieved twice per period on both the primary and secondary H-bridges. Typical waveforms are shown below.

The condition for ZCS at applicable times on primary and secondary sides is still V1D1=nV2D2.

It can be shown that:

Thanks to the flexible Carrier-Based PWM modulator provided with imperix’s library (CB-PWM), control over the duty-cycle and the phase-shift of the PWM signals can be achieved very easily:

In phase-shift modulation, the switched waveforms Vsw1and Vsw2 must be 2-level, i.e. D1=D2=0.5. In order to generate them from the primary and secondary H-bridges, the switching state of each of the 8 transistors can be obtained with a Carrier-Based PWM modulator (CB-PWM), using the following configuration:

In DAB applications, one can be interested in controlling the secondary voltage to a fixed value. A simple way of achieving that is by acting on the angle ϕ to control the power transfer to charge/discharge the secondary DC bus to the desired voltage.

On a possible implementation depicted below, PI controller regulates the secondary voltage at the desired value by generating phase-shift reference. In addition, a feedforward term can be added to the phase-shift reference for improved dynamics. In the case of phase-shift modulation, the required angle can be derived from the power transfer equation, considering \(P^*\) the required power to achieve the desired output voltage \(V^*_2\) on the load resistor \(R_{out}\):

Thanks to the imperix ACG SDK, this control implementation can be tested using offline simulation. The corresponding results are presented in the next section. The controlled system (converter model) is shown below and was drawn using PLECS Blockset.

The following results have been obtained with the provided Simulink file and the following simulation parameters:

The graph on the left-hand side below shows the reference tracking and perturbation rejection ability of the proposed control algorithm. At t = 0.1 s, a reference step from 50 V to 40 V is generated, and at t = 0.2 s, a load step from 10 Ω to 6.6 Ω.

The plot on the right-hand side shows the imposed phase-shift ϕ (red), which is the combination of a PI term (blue –) and a feedforward term (blue -.-).

A similar approach is used in the Fast EV charger with intermediate energy storage (AN007), where phase-shift modulation is used to control the secondary bus voltages of a Triple Active Bridge converter. In particular, experimental results show how the battery-side bus voltage is controlled after a step-change in the battery charging current.

For those wanting to use a more advanced modulation technique, the illustrations below give a sneak peek of what can be easily done with ACG SDK on Simulink. As always, the exact same implementation is also possible with PLECS and with CPP SDK. 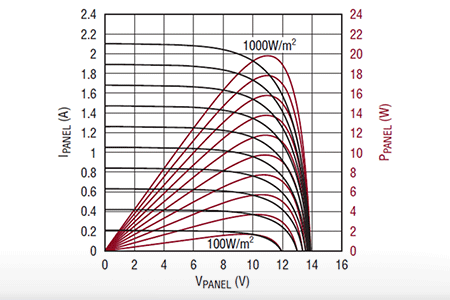 Some power sources, like solar panels, present power characteristics that strongly depend on the operating conditions. In such cases, Maximum Power Point Tracking (MPPT) is often applied to maximize the extracted power. 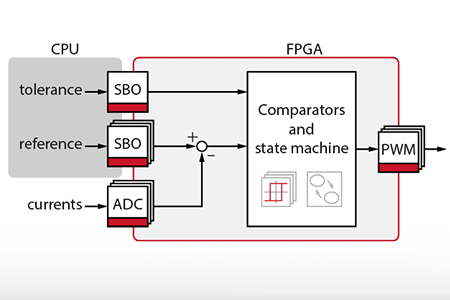